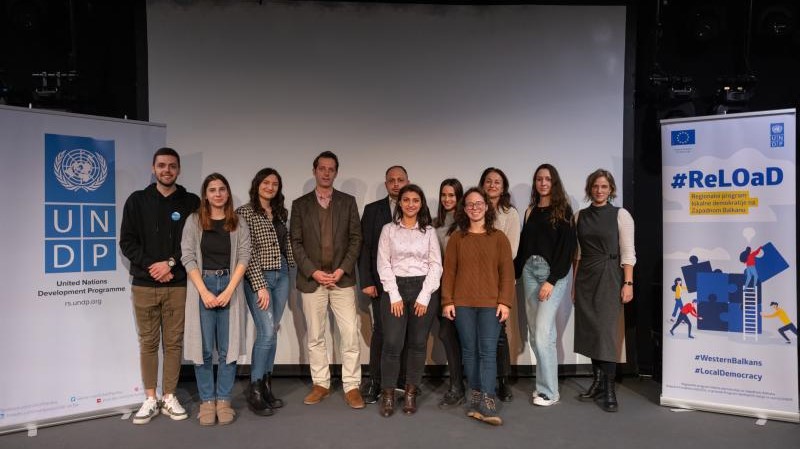 Nineteen-year-old Jasmina Delić and two years younger Majda Mušić attended weekly individual sessions with a psychologist in Bihać this year, during which they discussed their worries, fears, hopes and plans for the future. It was Majda’s first experience with psychological and career counseling, while Jasmina had previously attended similar support programs.

“The sessions I had helped me a lot to get to know myself and to face the choices I have to make,” says Majda, a third-grade student of the Bihać high school, who plans to study medicine and later specialize as a dermatologist.

“Everyone, especially adolescents, should seek psychological help if they think they need it,” says Jasmina. “It’s not a shame, and it can help us a lot. We need to get over that certain level of shame we have related to who will say what and realize that this help is very important to us.”

Thanks to the support she received from the psychologist, Jasmina was encouraged to enroll in a Faculty of Pedagogy in Sarajevo.

Jasmina and Majda are two of the hundred or more young people from Bihać, who received help through free psychological counseling and career guidance created by “Psychological and Career Counseling for Youth” project implemented by the association “Informal Education Network”. The project is aimed at young people up to thirty years of age, most of whom are students of primary and secondary schools in Bihać.

“For its users, the implementation of the project has so far resulted in support for mental health and well-being. It has had a positive impact on the quality of life for the users of psychological counseling,” says Demijan Kosatica, president of the association “Informal Education Network”.

Kosatica states that the project in Bihać popularized the importance of psychological counseling, and partially broke the prejudices that only people with impaired mental health need psychological help. “It’s not just for the mentally unstable, but it can help anyone improve their health, productivity and quality of life.”

The conclusion of numerous studies is that investments in the mental health support system in Bosnia and Herzegovina are insufficient, and the needs to preserve the mental health of children and young people, which has been further damaged during the COVID-19 pandemic, are often neglected. The project is particularly important for elementary schools in Bihać that do not have psychologists, Kosatica says. It also provides young people with professional orientation services and counseling on choosing a career based on their aptitude and ability.

That is why civil society organizations, such as the “Informal Education Network”, are an important link in the chain of providing often insufficiently developed social services at the local level. This was recognized through the Regional Programme on Local Democracy in the Western Balkans 2 – ReLOaD2, which seeks to strengthen civil society organizations in the countries/territories of the Western Balkans and encourage young people to actively participate in decision-making processes. Additionally, recognizing that cooperation between local governments and civil society organizations is often underdeveloped, ReLOaD2 works to strengthen partnerships between local authorities and civil society aimed at greater civic and youth participation in decision-making processes and improvement of service provision in local communities.

“The project enabled us to better communicate and cooperate with local government structures. Our association was formed at the beginning of the year and this is our first project. It was very important for us and made us recognizable in the local community”, says Kosatica. “This opened many doors for us for future work and facilitated communication with local partners. We believe that this is of exceptional importance, considering that non-governmental organizations are the carriers of the development of society, and in our country they are not sufficiently recognized as such.”

The ReLOaD2 programme, apart from Bihać, is implemented in twelve other municipalities and cities in Bosnia and Herzegovina (Centar Sarajevo, Gacko, Goražde, Gradiška, Istočno Sarajevo, Mostar, Novo Sarajevo, Prijedor, Prozor-Rama, Rudo, Ugljevik and Vitez ). In Albania, 13 local governments are included in the program, while there are 15 in Montenegro, 7 in Kosovo, 8 in North Macedonia and 7 in Serbia.

The project of the “Informal Education Network” association is among a total of 173 projects that have so far been supported through the ReLOaD2 programme in these six countries/territories. Projects related to improving the quality of education, preserving the environment, promoting gender equality, sports, and other related topics are implemented by local civil society organizations.

The aim of the programme is to strengthen participatory democracy and the European integration process of countries/territories in the Western Balkans by empowering the non-governmental sector and young people to actively participate in decision-making and by stimulating a supportive legal and financial environment for civil society organizations. The programme promotes the use of the LOD methodology for transparent distribution of public funds intended for civil society organizations at the local level.

After the signing of the Memorandum, UNDP Albania helped the Ministry to revise the legal acts so that the LOD methodology could be applied in their work. The memorandum envisages the inclusion of young people in the process of selecting priorities for the call for submission of project proposals to the National Agency for Youth as the implementing body, as well as their inclusion in projects selected in a transparent manner. UNDP Albania expects that this will help greater youth engagement and promote public dialogue on youth-related issues.

“We have taken a very big step. We changed the National Youth Agency to work according to the LOD model”, said Bora Muzhaqi, Minister of State for Youth and Children in Albania, emphasizing its importance in funding youth organizations at the second ReLOaD2 regional conference held in Tirana in November 2022. “I am happy to say that we have successfully completed our first public call using this model, as all youth organizations have realized that using the EU model and replicating it in different countries/territories can be just as successful as creating your own, if not more so.“

In addition to providing assistance in the improvement of legal acts, the ReLOaD2 team in Albania organized training and mentoring sessions for the staff of the Ministry of Youth and Children and the National Youth Agency of Albania. Additionally, at the request of the cabinet of the Minister of Youth and Children, the project team provided advisory and technical assistance in May and June 2022 through the organization of a transparent public call for civil society organizations that was announced in July. In addition, the team worked on training ministry staff related to the distribution of funds in a more transparent manner.

“The support we offered to these public institutions will help them organize public calls for the civil sector in a more inclusive and transparent process and will be trustworthy in the future,” says Juljan Papaproko, project manager of the ReLOaD2 project in Albania.

The first result of adopting the LOD methodology has already been achieved. The number of submitted project proposals has increased significantly – in this call for submission of project proposals, the National Youth Agency received almost half as many applications (119 compared to the previous 66). In addition, 23 employees from the National Agency for Youth and the Cabinet of the Albanian Minister for Youth and Children were trained on the application of the LOD methodology. The inclusion of representatives of civil society organizations in the process of evaluating project proposals will further increase confidence in the distribution of public funds.

The award ceremony will be held in December this year. UNDP Albania will support training and mentoring sessions for staff of the National Youth Agency during project monitoring and final evaluation of the call for proposals. The implementation of the selected projects will begin in December 2022.

“The most important thing to mention for ReLOaD2 in this process is that the adoption of the LOD methodology by public institutions at the national level can show that not only the local government but also other national entities in the future can partner with the civil society sector to improve transparency in the distribution of public funds and the provision of quality public services”, says Papaproko.

The ReLOaD2 programme, which lasts from 2021 to 2024, also focuses on providing support to young people in the region, which is one of the key values ​​of this phase of the program.

Within the framework of the ReLOaD2 program, the organization “Education Code” in the municipality of Kamenica in Kosovo implemented a project called “Understand my silence” which supported and promoted the needs of young people with impaired hearing in Kamenica. The main goal of the project was to enable young people with hearing loss easier access to public and administrative services and to promote the importance of the needs of people with disabilities.

“In Kosovo, the situation of people with disabilities, especially people with impaired hearing, is continuously neglected. This is probably due to other priorities of the society, the limited budget of the central and local government and other socio-economic circumstances. People with impaired hearing have limited access to education, health and public services”, says Mimoza Krasniqi Stanovci, founder and director of the organization “Education Code”.

This project, through learning sign language and the language of writing and reading, encouraged the building of communication bridges between parents and their children, members of their families and their friends. “Holding these trainings greatly helped the hearing impaired and their families. This made it easier for them to communicate in society, participate in everyday life, and make it easier to fulfill requests and access the community,” says Krasniqi Stanovci.

Continuing through the “Education Code” organization in Kosovo, the “Nonformal Education Network” in Bosnia and Herzegovina and numerous other organizations throughout the Western Balkans region are working to improve the quality of life of young people through the ReLOaD2 program. “Young people need support and help, and the activities of local organizations provide them,” adds Jasmina 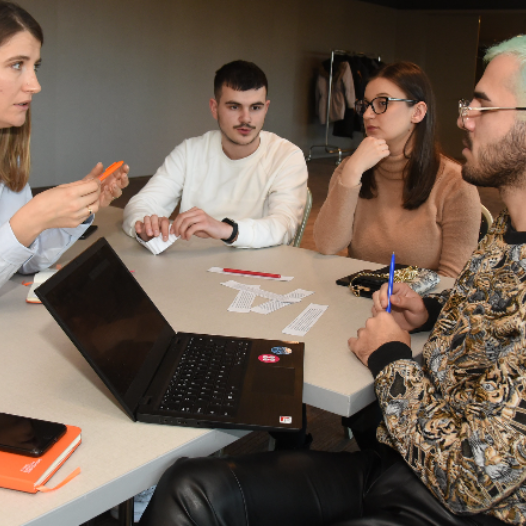 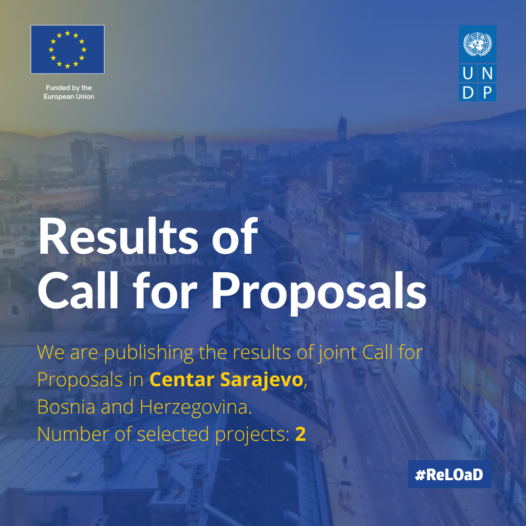